Sometimes, technical problems occur when mods are used. Here are some common problems and potential solutions.

While the possibilities are numerous, it is not recommended to try to use all mods at once. Every additional model requires some disk space and increases the RAM usage ingame once used. Additional scripts may need some additional computation time. Thus it may be possible that slower computers tend to be overwhelmed when using hundreds of mods.

If you encountered serious slowdowns directly after adding a certain mod, try to play the game without it again. If this is the case it is likely that the mod has some negative performance side effects.

Especially when mods are used, in rare cases game crash may occur. There are different possible reasons for the crash related to mods. Likely are:

In any case the search for the cause can be cumbersome. Usually the error message gives a hint to where the error occured and what the problem might be. Maybe a similar problem was described earlier in some discussion in one of the communities? If you recently had an update of the game or the mod you might try to revert to an older version if available.

See below for information on how to get further assistance in case of crashes.

Sometimes mods that were previously installed can't be found by the game anymore. Then the savegame can't be loaded and the missing entry is marked with a red triangle. In case of Steam Workshop mods, just click the

icon to open the corresponding Workshop pages of the mods. Check if they still are where they should be. If they are not, try to reinstall them by either unsubscribing and subscribing again in the Steam Workshop or by manually downloading them again. In some cases it is possible to replace a missing Workshop mod with a manually installed version of the mod. If the mod can't be restored anymore, it may be possible to remove it without destroying the savegame. 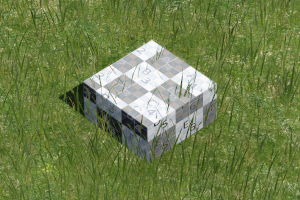 In any case it is neccessary to deactivate the mod. Do the following steps:

If there is no replacement mod or that mod does not cover all contents of the missing mod, it is likely that some models are replaced by dummy cubes. These behave like static assets or very slow vehicles, depending on the type of model that got replaced. These static cubes can be deleted or vehicle cubes can be replaced by working vehicles in the vehicle manager.

Missing mods can't be found by using the search function. Scroll through the list and look for the red triangle.

Once a model is replaced by a dummy, it can't be automatically replaced by the correct model again. Be careful when overwriting a savegame with a map containing dummy cubes.

Removing mods that contain scripts might have other issues resulting in crashes and corrupted games. It is done at your own risk!

There are various reasons why some contents do not show up in the game although the mods are installed and activated.

Already existing instances of the filtered models are replaces by dummy cubes too. An entry in the stdout looks like

If you struggle to solve the problem yourself, you may ask somebody else for assistance. Usually it is helpful to provide as many details as possible. These details may be:

See the general troubleshooting section to find out where to get further assistance.

Keep in mind that the log files are resetted on game startup. Save them somewhere else before starting the game again after a crash. Further details can be found in the description of log files.