Since the launch on December 11th 2019, the developers continue to improve the game and add further functionality. These changes are released as updates. Every major update is announced at transportfever2.com as well as on Steam.

If you are interested in what the exact changes are that come along with the updates, have a look at the release notes.

Get the latest Update

The latest build is automatically downloaded by the Steam client, Epic Games launcher or GOG Galaxy client. GOG users not using GOG Galaxy can download the latest build in the GOG games library. The MacOS App Store supports both manual and automatic updates. For more information see the guide from Apple.

Before a game update, the oncoming changes are often available as a beta version to be tested by the users. 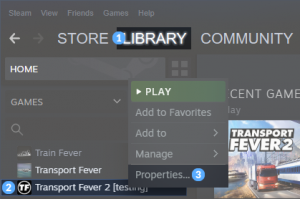 If you want to try out new features and help us testing the stability of new versions, upcoming patches can be accessed in advance by using Steam branch “external testing”.

To switch the branch, close the game and open your Steam game library 1. Right click Transport Fever 2 in the game list 2 and selected “Properties”3. Under the “BETAS” tab 4 you can select “external testing” from the pulldown menu 5. This can be reverted anytime.

The “testing” version is equal or newer than the current release version on the main Steam branch. 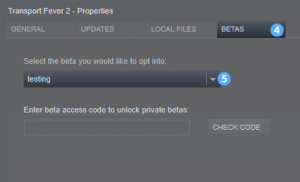 To access the beta branch, use the GOG Galaxy client and go to Transport Fever 2 > Settings icon (at the top) > Manage Installation > Configure… and select the Testing branch in the dropdown.

Unfortunately it is not possible to access the beta version for Linux as GOG Galaxy is not available for Linux and the beta channels can't be accessed without the client.

Please note that the testing version might not be stable, so you should always save your game under a new name when using it. Games saved in a newer testing version may not be loadable in an older release.

It is possible that some mods get broken due to updates. Please be patient, in most cases it is possible to sort the issues out sooner or later.

If you have problems with current versions of the game and prefer to switch back to an older version, this is possible as well for the Steam version.

To switch to a previous version, close the game and right click Transport Fever 2 in your Steam library and selected “Properties”. Under the “BETAS” tab you can enter the code “buildArchive” plus the number of the build you want to access, for example buildArchive29596. After that, select the build from the pulldown menu. This can be reverted anytime by switching back to testing or NONE (stable version).

You can find a complete list of the build numbers in the release notes.

Please be aware, that using an older version is not officially supported and might result in corrupted save games and can cause issues with mods released at a newer date.