In order for a train to be able to reverse direction, the first, the last vehicle as well as every motorized vehicle in the consist needs the reversible parameter set to true.

Be aware that an instance of a mesh can't be used for multiple of these purposes. Each mesh id may at most appear in one of the config lists. To use the same mesh in several cases, add another instance of it. It is possible to use these configurations for other purposes like end of train devices, switching pantographs depending on the location in train and interconnecting gangways between coaches.

It is possible to restrict crew seats to only be used in forward or backward direction by using the forward property.

To display some seats only when the vehicle is at the front of the train, use one of the meshes that are set in the config properties described above as anchor meshes. In the code block above these would be mesh id 10 for forward front lights and mesh id 12 for backward front lights.

With Transport Fever 2 a new grouping feature has been added to the buy menu. This is especially useful for shape variants, repaints and multiple units with different length configurations. The following section is a detailed introduction to the necessary adjustments of the models. 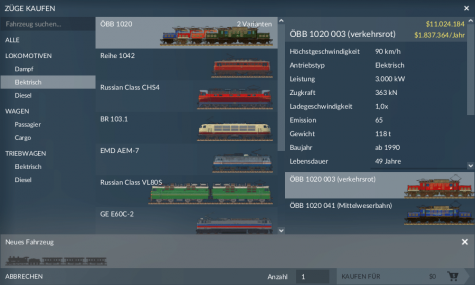 Groups for the buy menu are passively defined in Transport Fever 2, i.e. a group is not explicitly defined with the contents contained in a separate file. Instead, the vehicles are optionally specified to be included in a group (and in which group). Only then will a purchase menu entry be displayed as a group.

In the game such a grouping is indicated by the reference to n variants in the upper right corner of the group entry. In the right column you will then find another list with the variants contained in these groups in the lower area. The technical data shows the values of the currently selected variant in the group.

The group is entered in the transportVehicle code block. The keyword to be used is groupFileName. The path to any mdl, which is to serve as a group entry in the purchase list, must be specified relative to the models folder. An example looks like this: 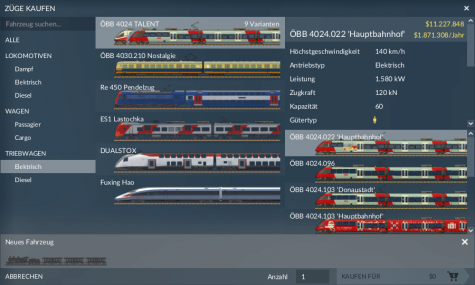 In the case of multiple-unit trains, the representation looks exactly the same as for individual vehicles. Here, such a grouping is indicated by the reference to n variants in the upper right corner of the group entry too. In the right column you will then find another list with the variants contained in these groups in the lower area. The technical data shows the values of the currently selected variant in the group.

The group is entered in the return code block. The keyword to use is also groupFileName. Behind it is the path:

Especially for vehicles with many colour variations one would like to show in the group entry what one can expect in the group. Therefore it is necessary to create an individual menu model as a placeholder, which is never displayed in the game itself as a variant to buy. This model gets the name of the desired group and the preview image is saved as ui image in the ui/models_small folder. In the code it is important that the multipleUnitOnly entry is set to true. As long as no multiple unit contains the model, this means that the entry itself is never offered for sale, but only appears if a subordinate train or model is available. It is important that the groupFileName is not set for this model:

The examples shown above each use an individualized menu item according to this scheme. To support a common style, it's recommended to use one of the two common styles for the menu icon.

The first style places the icons all on the same level. To create the image do the following steps:

Another common style uses diagonally offset images. There is a fanmade online generator tool available, though it is currently only available in german.

Different availability, other modes of transport and engine types

For vehicles with a long development time, it is not necessary for the group model to cover the availability range of all variants. If only one variant is available at a time, it is displayed individually in the purchase list. As soon as two or more variants are available, the group entry with the variant list is displayed.

Grouping is not only possible for rail vehicles. It can also be used for other vehicle types (aircraft, ships, road and tram vehicles).

For rail vehicles, there is also the special case that different variants of a group have defined diesel and other electrical equipment as drive types, for example. If in the purchase menu the tab is set to “ALL”, all are displayed under the group. If e.g. diesel vehicles have been explicitly selected, only the corresponding subset of the vehicles is displayed.

vehicle parts with their pivot points at normal bogies

Transport Fever 2 uses the axle configs to determine which part of the vehicle need to be aligned along the tracks or street lane:

The picture shows the Be 4/6 tram that has three articulated parts. The middle frame sits on two axles and is considered as a bogie on its own. The front and back parts have one bogie seperated from the main frame. As they each do not have a second bogie, the articulation would not look good in turns. That is why there might be the need to imitate a bogie, especially on articulated vehicles or road vehicles with steering wheels.

These so called fake bogies are manually scripted pivot points that are attached to a node as replacement for non existant real bogies. They are listed per LOD in a fakeBogies list block in the vehicle config block: 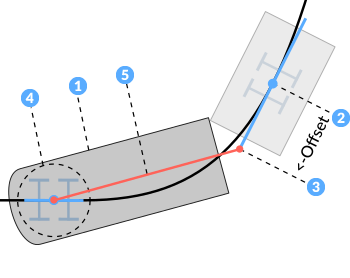 Each fakeBogie has three properties:

It is possible to define up to two fakeBogies per node. If the number of real bogies and fakeBogies exceeds two, the regular bogies are overridden. In the example there is a regular bogies 4 beside the fakeBogie explained above. The node will then align along the connection of the two pivot points 5.

The Be 4/6 tram that with its three articulated parts received two fake bogies both positioned in the center and with an offset from there.

Road vehicles usually have their fake bogies either between the two axles or in case of articulated busses on the back axle of the front part but with an offset to the hinge between front and back part.

It is recommended to use the node tree with numbers in the model editor to get the correct ids.

In Transport Fever 1, there was the possibility to define own cargo models for display on loaded vehicles with the loadIndicators. Due to a new implementation of the cargo loads in Transport Fever 2, this method is not supported anymore. Instead, the new customCargoModels concept is introduced which provides even more functionality. This feature has several possible use cases, e.g. it is possible to:

In the .mdl files there are two relevant blocks concerning cargo known so far. For passengers this is the seatProvider and for all cargoTypes it is the transportVehicle block with the compartmentsList. To define the position of custom cargo models, there is a new block called cargoSlotProvider.

The cargoSlotProvider contains a list of slots inside the property slots. Each of the slots has several properties:

Be aware that the cargo models are actual mdl files and not only mesh files anymore. You can either reference a model relative to res/models/model/ or set a dynamic reference to a generic cargo model depending on the actual cargo type by using “#SMALL” where SMALL is a key of the discreteModels or levelModels in the cargo type definition.

Inside the cargoEntry block, it is possible to use a new block called customCargoModels. It can be used in addition or instead of cargoBay and seats there.

The customCargoModels block has another property called configurations. This property contains a list of slot configurations. Each configuration has a list of slotLevels. Each level can have zero or more cargo slot ids from the cargoSlotProvider and they are used top down. The first level is used when the vehicle is empty, the last level is used when the vehicle is almost full. The more levels are defined, the smaller are the intervalls between the levels. 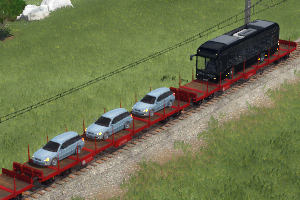 As an example, the modern stake car that is available from year 2000 was used and modified so that it transports cargo items of type MACHINES. There are 4 slots defined in the cargoSlotProvider, one for the bus that uses the whole cargo waggon and three for the smaller cars that are placed next to each other. The car slots have more than one possible model that can be displayed. It is randomly selected which one should be displayed.

The example .mdl file with cars as models for the “MACHINE” cargo type described above is available for download. Please be aware that this file alone is not usable in the game, it needs some other files for a working mod.